(The above picture was developed by Darrell Dodge and is used with permission. The list that follows was compiled by Judy Kuster from an NSP handout and personal additions from various resources, including Knotted Tongues, a book by Benson Bobrick, and Stuttering and Other Fluency Disorders, by Franklin Silverman – with hypertext links to several internet references.)

Aesop – Greek storyteller, and a huge collection of his fables

Notker Balbulus (the Stammerer), a Dark Ages monk who played important roles in both plainchant and the development of our calendar.

Balbus Blaesius – A Roman who was in a “freak show.” People would give him money to stutter. His last name is the Italian word for stuttering

Baudouin the Lannoy, a knight of the golden fleece – portrait by Jan Van Eyck in the State Museum in Berlin.

Jorge Luis Borges – (1899-1986) was the author of Labyrinths and Ficciones, among other books.

Nicolae Ceausecsu – President of Romania in the 1970’s

General Joshua Chamberlain, one of the heroes of the Battle of Gettysburg and college professor of literature (source: Military History magazine).

Churchill’s speeches (Point of information, the following page claims that Churchill did not suffer from stutering, but from a lisp. I have heard and seen video tapes of Churchill. However, there is ample evidence uncovered by Keith Sharp that my cousin (yes he was;-) stuttered, JAK).

Hazen “Kiki” Cuyler – a Hall of Fame outfielder for the Pirates in the ’20s. His nickname is pronounced with long I’s; i.e, Ky-Ky. Reason: He was a stutterer, and often pronounced his last name Ky-ky-ler. (posted by Bob Wells on Stutt-l, August 12, 1997)

Nat King Cole – In an interview, Cole biographer, Daniel Epstein states that Cole had a stutter as a child and a bit of a lisp which you can hear in the early recordings in his career. If you want to listen to the interview via Real Audio, open and move the cursor on the Real Audio player a little past midway (I count 10 dots).

Richard Condon – Novelist whose works include The Manchurian Candidate and Prizzi’s Honor.

Charles Darwin – Naturalist and author of The Origin of Species.

Marion Davies “one of the few silent stars to survive the transition to talkies.”

Demosthenes – Greek orator by Plutarch, written 75 A.D. as well as several of the writings/orations of Demonsthenes

Niccolo Fontana, nicknamed Tartaglia(stammerer) because of his speech – an Italian mathematician famous for his algebraic solution of cubic equations. Read about what caused his speech problems and decide for yourself if he stuttered or not.

Harley Earl, one of the most famous car designers ever. (Source: American Heritage magazine).

Leigh Hunt a writer of the early Romantic period and a classmate of Charles Lamb.

by Trinidad contains Songs Of Scatland with many lyrics and several audio files of songs.

An Interview with Scatman John Larkin by Ira Zimmerman.

Amazon has a new MUSIC STORE where you can order Scatman John Larkin’s CDs that haven’t been available in any other music store I’ve checked!

Major General Alexander McDougall of the Continental (U.S.) Army during the American Revolution. He was also a delegate to the Continental Congress, president of the first bank in the state of NY and served in the NY state senate.

Somerset Maugham – British writer considered one of the best short story writers of all time, including Of Human Bondage, an autobiographical novel which substitutes a physical disability for the author’s stuttering problem.

Michael II, Byzantine Emperor 820-829,succeeded Leo V to the Byzantine crown in 820, and on his death in 829 was succeeded by his son Theophilus.

Moses – Hebrew prophet. (Was Moses A Stutterer? by Gerald McDermott 9/19/2013,article on FIRST THINGS,”America’s Most Influential Journal of Religion and Public Life”

Moses Mendelssohn – Grandfather of the composer.

The following historical figures from China, are reported to have stuttered in parts of their life. They are provided by Stefan Hoffman.

Arthur M. Blank – co-founder of the Home Depot and owner of the NFL’s Atlanta Falcons

Nicolas Brendon, movie star, reports that he stuttered significantly until after high school.

Rubin Carter – professional boxer – ‘Hurricane’ by Tom Tozer relates that Rubin “Hurricane” Carter stuttered as a child. Carter’s story, made into a movie starring Danzell Washington, is about a “professional middleweight boxer who was arrested in 1966 for the murder of three whites, sentenced to a triple-life term and finally exonerated in 1988.” Tozer’s article states, “As a youngster, Carter used his fists to help dissuade others from laughing at his stuttering.” The information about his stuttering is also found here.

Lord David Cecil – Professor of English literature at Oxford in 1950s and author of Melbourne, one of The Board of the Modern Library’s100 Best Nonfiction books of the century

Proinsias De Rossa – a political leader of the Democrat Left in Ireland.

James Griffin – the producer and presenter of the ABC TV’s Last Word and is an occasional contributor to Books and Writing on ABC Radio National, Australia

Edward Hoagland – essayist and contemporary nature writer. The football game in my head US News and World Report article about Edward Hoagland

Adrian Peterson running back for the Chicago Bears.

Nino Salvatore – Past president of Medicine at the University of Naples

Budd Schulberg – auther, screenplay – On The Waterfront and musical, What Makes Sammy Run

Duane Thomas – a running back for the Dallas Cowboy’s in the early 70’s, according to interview with Larry Merchant, on Real Sports, HBO

Mel Tillis – Country-western singer. An interesting FAX sent to Art Nefsky from Mel Tillis on September 30, 1997, about his stuttering, is online.

Ken Venturi – Golfer. Won U.S. Open in 1961. (An interview with Ken Venturi where he talks about his stuttering.)

Bill Withers (1938- ), singer and songwriter, whose first hit, Ain’t No Sunshine, went to number three in 1971, won a Grammy for best R&B song, and was heard in the movie Notting Hill. His biggest hit was Lean on Me, which went to number one in 1972. He also recorded Use Me, which peaked at number two in 1972 and is on the soundtrack to American Beauty. The Gap used his song Lovely Day in its 1999 advertising campaign. Withers married Denice Nicholas, a star on ABC’s TV series Room 222. He was born in Slab Fork, near Beckley. Withers dropped out of school after the ninth grade and spent nine years in the Navy, where he underwent speech therapy to overcome a stuttering problem. After his discharge, he delivered milk and worked for Ford Motor Co., IBM, and Lockheed. from Famous West Virginians

Controversial and cartoon personalities who stutter

John Melendez, a rock guitarist and interviewer for the controversial Howard Stern show

People Who Stutter, INSPIRE, by Rebekah and Michael Sugarman featured in an article in the 2010 International Stuttering Awareness Day Online Conference.

Famous People Who Stutter – website/poster from the Stuttering Foundation. 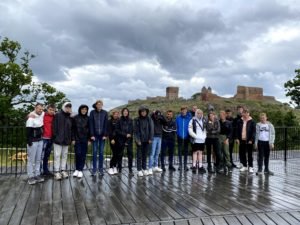